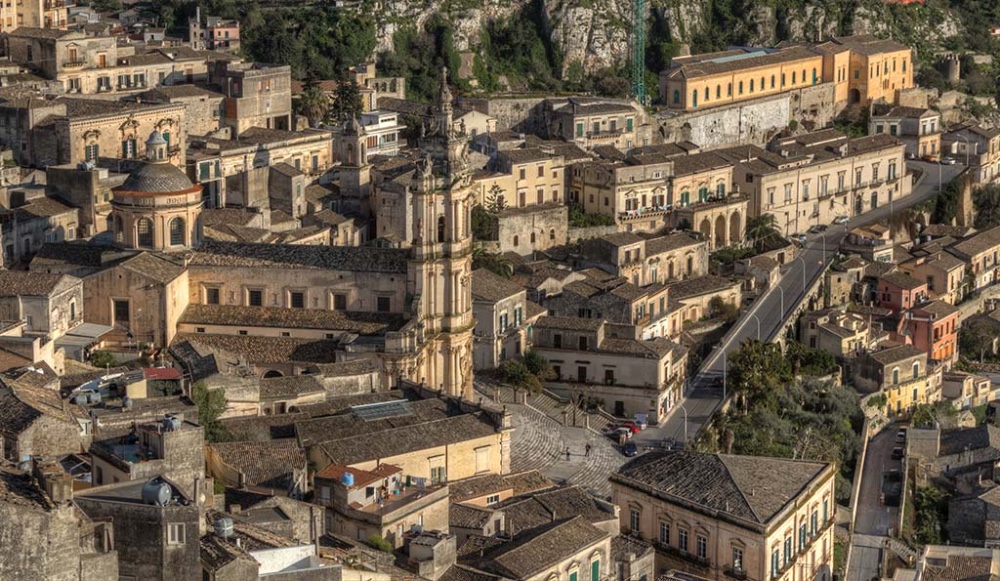 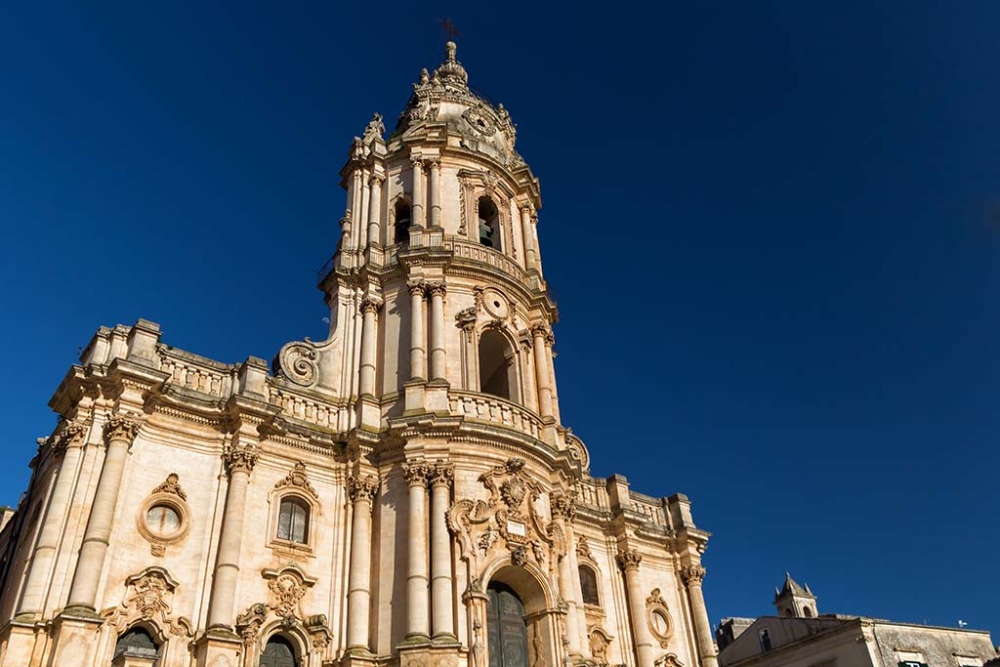 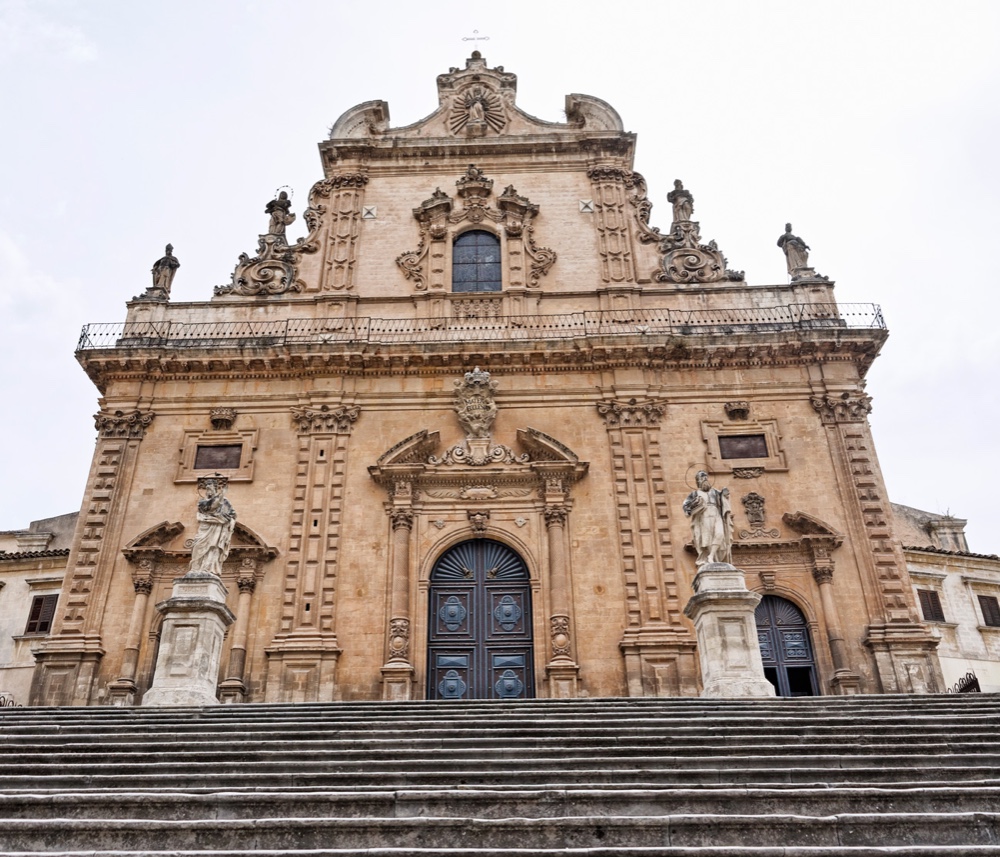 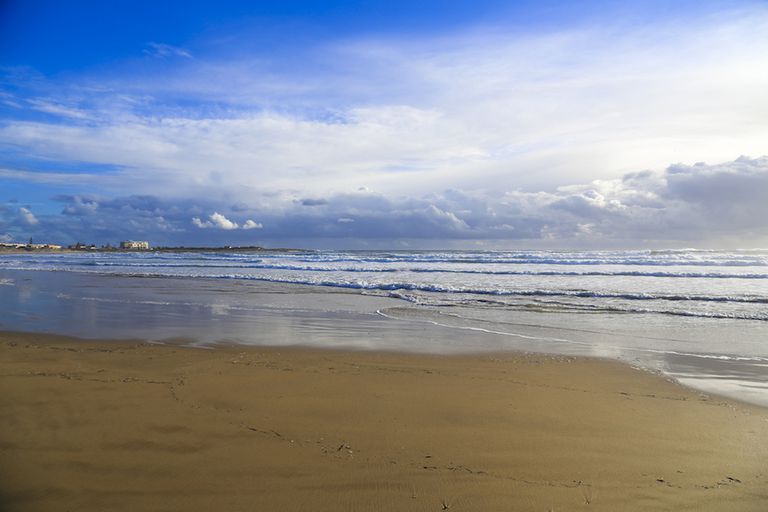 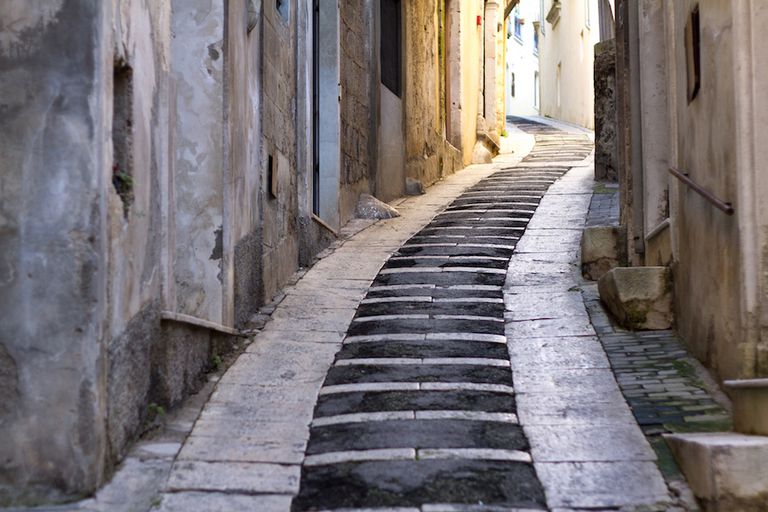 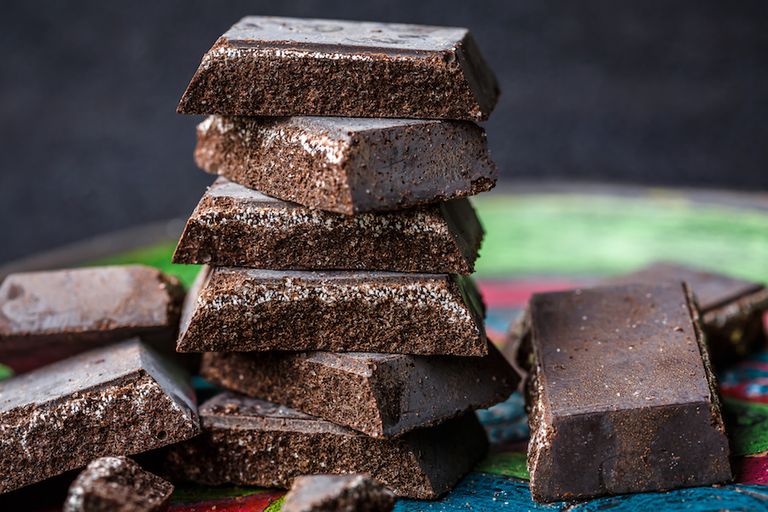 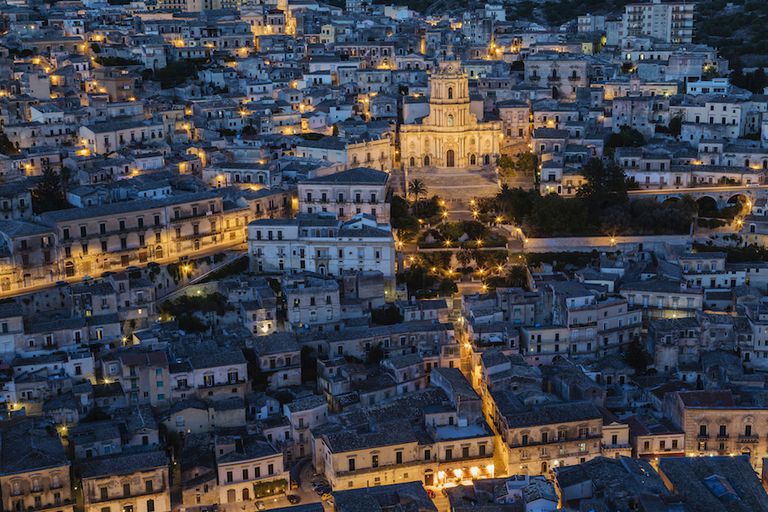 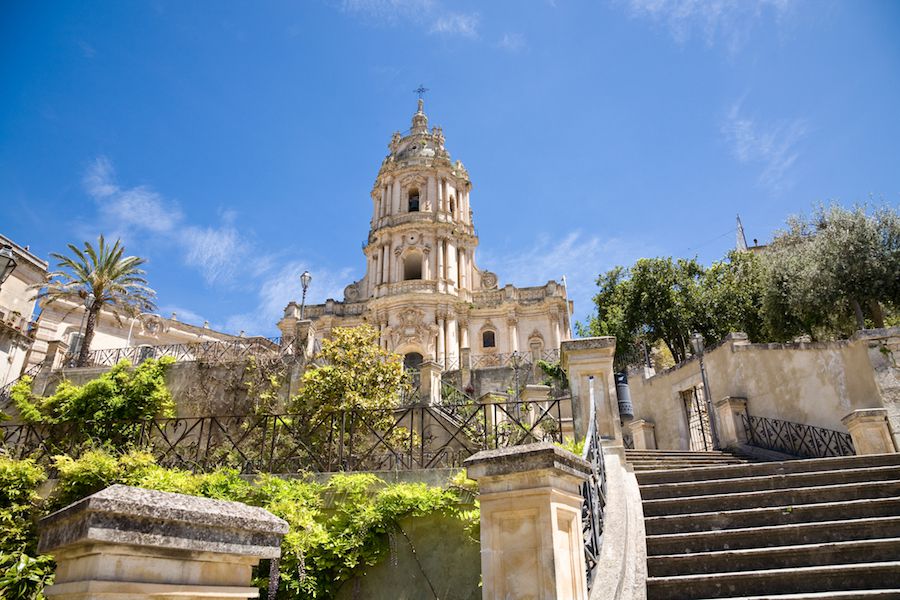 A baroque town in the Val di Noto, Modica is located in the south-east of Sicily and has been a UNESCO World Heritage Site since 2002.
It is a city of Neolithic origin, capital of an ancient and powerful County, which boasts a rich repertoire of gastronomic specialties, as well as a great artistic and cultural heritage. Today, it is best known for its production of typical Aztec-derived chocolate.
The historical centre of the city, entirely rebuilt after the earthquake of 1693, is divided into two large districts: Modica Alta and Modica Bassa. Today, walking through the streets of Modica means making a journey steeped in history among late Baroque palaces, churches with majestic steps and great masterpieces.
The countryside of Modica, characterized by a dense network of "dry stone walls" that delimit the plots of land, are quilts of majestic carob trees, olive trees and prickly pears and give truly beautiful landscapes.
Modica is the perfect place for a holiday in Sicily, an excellent starting point to visit the baroque cities of Val di Noto and take a dip in the clear waters of its coasts full of golden beaches.

What to see in Modica: among the streets of the baroque quarter

Curious about visiting Modica and its historic centre?
Discover with us its treasures and take note of the most beautiful routes to plan your holiday.
The urban center of the city has a very particular conformation and extends along a valley and then climbs the hills that surround it. Along the limestone ridges, typical of this area, the inhabitants have literally "dug" houses and tombs over the centuries, so much so that today there are about 700 caves.
Visit the necropolis of Quartiriccio, in the historic center, and the Vignazza district, with a few dozen tombs dug into the rock, dating back to 2200 BC.
The old town centre is a labyrinth of small houses, alleys and long staircases wrapped around the spur of the Pizzo hill, on which the Castle rested.
The main churches, such as the Cathedral of San Giorgio and the Church of San Pietro, usually do not overlook squares, but imposing and spectacular stairs that climb up the slopes. The prevailing style of the monuments is the one commonly identified as late baroque.

Modica preserves such a high number of churches that it has been nicknamed "the city of a hundred churches". We recommend you the most beautiful and interesting from an architectural point of view, as well as some of the most remarkable palaces of the city.

The Cathedral of San Giorgio is the most imposing and majestic church in the city, often referred to as a monument symbol of Sicilian Baroque.

The church of San Giorgio, which is part of the UNESCO monuments of the city, is the final result of various and skillful reconstructions occurred after disastrous earthquakes, the most serious of which was that of 1693. You will be amazed by the 36 m high dome and the scenic staircase of 164 steps.
A little curiosity: if you want to admire the spectacular view of the church with its imposing staircase, go to the opposite hill, on which stands the district Cartellone.
On the left side of the Cathedral of San Giorgio is Palazzo Polara, late eighteenth-century noble residence in late Baroque style, on whose pediment stands the coat of arms of the family with the polar star.
Climbing even higher you reach Pizzo Belvedere, from which you can enjoy a beautiful view of the city.

The Cathedral of San Pietro

Modica - Church of San PietroThe Church of San Pietro is the most important in the city, along with the Cathedral of San Giorgio. Both have, in fact, the title of Mother Church. This duality is a symbol of an ancient rivalry between the two districts to which these parishes belonged.
The Church of Santa Maria del Gesù and its cloister, together with a convent complex dating back to the second half of the fifteenth century, are worth a visit.
One of the most interesting palaces in Modica is Palazzo Grimaldi, which is the most beautiful example of a building in neo-Renaissance style among those overlooking the historic center and place of art exhibitions.

The Church of San Giovanni Evangelista is located in Modica Alta and has a beautiful late Baroque facade with a majestic and wide staircase that precedes the entrance.

Another wonderful building in Baroque style is the former Benedictine Monastery, now Palazzo della Cultura, which houses the Civic Archaeological Museum and a collection of paintings belonged to the Sicilian poet Salvatore Quasimodo.

The Church of the Carmine preserves some elements prior to the earthquake of 1693, including a portal dating back to 1300. It is, in fact, one of the few monuments that resisted the terrible earthquake, which devastated much of eastern Sicily.

The Church of Santa Maria di Betlem is one of the three ancient collegiates of the city and dates from the fourteenth century. Its Palatine Chapel is a National Monument that is part of the list of assets to be safeguarded, established around 1930 by the government of the Kingdom of Italy. Very interesting from an architectural point of view is the Portal De Leva, in Gothic style dating back to the early '300.

Finally, it is worth visiting the Church of Santa Maria del Gesù with its splendid cloister in Catalan Gothic, in Piazza del Gesù in Modica Alta.

If you have more than one day to visit Modica, below we indicate some interesting places located just outside the historic center.

On one of the hills overlooking the historic center stands the eighteenth-century convent of the Capuchin Friars. It is worth visiting this beautiful Franciscan building, perfectly preserved, its cloister and the Church of San Francesco.

Modica - Torre OrologioThe Castello dei Conti, a fortification built on top of a rocky cliff with sheer walls, was for many centuries the seat of political and administrative power of what was once the County of Modica. In front of the castle is the eighteenth-century clock tower, built on top of a medieval watchtower.

Today the clock tower has become one of the symbols of the city that you can find in the shops in the form of small souvenirs to take home.

What to see in the surroundings

Modica is the ideal base to explore the fascinating South/East of Sicily with its beautiful sea, nature and history.

The territory of Modica is scattered with archaeological and naturalistic areas of great interest.
The Cava d'Ispica gathers, in 13 km of length, numerous testimonies of different eras: from the Sicilian baked caves of the Bronze Age, to the Christian catacombs of the fifth century AD, as well as the rock frescoes of the "Cave of Saints" and the ruins of the Byzantine church of S. Pancrati. The catacomb of the Larderia, a hypogeic cemetery that preserves 464 tombs divided into three underground galleries, is remarkable. The site is in fact a real "city in the rock", where near the caves inhabited by men and pets, there were other used as warehouses, or places of worship with altars and frescoes on the bare rock. Very beautiful also from the naturalistic point of view, the quarry is suitable for walks and trekking. It has, in fact, a particularly lush vegetation populated by many species of birds.
Near Cava d'Ispica extends Cava Lazzaro, also rich in caves and nature trails. Here, precious finds have been found in the Civic Museum of Modica.
And finally, Cava dei Servi: an alternation of sheer rock faces, flat areas and deep gorges in which the Tellesimo stream flows. The area that is part of the Forest Park is easily accessible and ideal for nature walks.
For those who want to go to sea, the seaside areas of Modica offer beautiful beaches of golden sand, such as those of Marina di Modica Maganuco Pozzallo and especially the beautiful beach of Sampieri with the ancient furnace in the background, where several episodes of Commissioner Montalbano have been set. They are equipped beaches and are characterized by crystal clear waters and shallow waters, ideal for a family holiday with children.
A few kilometers away, you can visit the beautiful baroque towns of Val di Noto: Scicli, Ragusa Ibla and Noto. From Modica it is also easy to reach Syracuse, Marzamemi and its beautiful seaside resorts, such as the Reserve of Vendicari, the Island of Currents and the Island of Capopassero with its Fortress of Charles V that marks the transition from the Ionian Sea to the Mediterranean Sea.

DISTANCES for some interesting sites:

The nearest airport is Comiso 43 km, 40 minutes by car. Catania airport is 120 km, 1 hour and 30 minutes away. From the airports there are buses that connect them to Modica.

This site uses cookies, including from third parties, to optimize the user experience while browsing and allow basic functionality; collect anonymous statistics; profile the user to send him advertising in line with his preferences.